WPTavern.com recently reported on what is thankfully a rare occurrence at WordCamps (and particularly at larger conferences of any sort). As alluded to in a since-deleted post to the official WordCamp US blog, the sponsorship of Pantheon, a web hosting provider, was revoked literally in the middle of the night before WordCamp US 2016. As I will show, this entire incident is a case study in how not to handle this type of situation, and my hope in making this post, with the facts as I know them and my conlcusions (opinions) based on these facts, is that an incident of this type doesn’t happen again anywhere–WordCamp or otherwise.

Here are the facts based on the research and things that have been told to and pointed out to me, either from the WPTavern article or otherwise. First, quoting the WPTavern article (it’s a bit of a long quote, but can’t really be trimmed without affecting any key points):

Prior to WordCamp US Matt Stodolnic, Pantheon’s Vice President of Marketing, contacted the Sheraton Downtown Philadelphia and inquired about advertising opportunities. The Sheraton hosts a number of meetings and has a couple of different advertising packages available. Stodolnic purchased advertising space on the hotel’s elevators. The advertising material was simple and didn’t make unprovable claims, such as the world’s best or fastest host. This is in line with the sponsorship rules.

On December 1st late at night, Stodolnic received an email from WCUS organizers requesting that the advertising material be removed. Stodolnic pushed back as the sponsorship agreement does not specifically prohibit advertising in the hotel. At one point during the exchange of emails, the WCUS organizing team threatened to take the banners down themselves. Stodolnic responded with anger as the purchase had already been made but he quickly apologized.

The issue was eventually escalated to Matt Mullenweg, co-creator of the WordPress open source software project, who revoked the company’s sponsorship of the event for violating the code of conduct. Later that night, WCUS organizers deconstructed Pantheon’s booth and moved it to a storage room along with 600 T-shirts printed by the company.

(I was told by a source that in addition to the elevators, advertising of the concierge table was also purchased by Pantheon.)

The article goes on to mention and post a screenshot of a blog post, since deleted, by Cami Kaos, one of the lead organizers of WordCamp US. Curiously, the screenshot has the name of the poster crudely scratched out (disappointing, as that kind of thing can make accountability a bigger challenge than it need be). I remember seeing Cami’s name on the post as I was following the blog and attempting to watch some of the livestreams (the latter of which wound up being a wash due to technical problems, but that’s another story that I am unlikely to post about). You’ll just have to take both Jeff Chandler’s and my word for it that it was originally posted by Ms. Kaos, unfortunately, as I lacked the foresight to have made a screenshot I could later post uncensored. 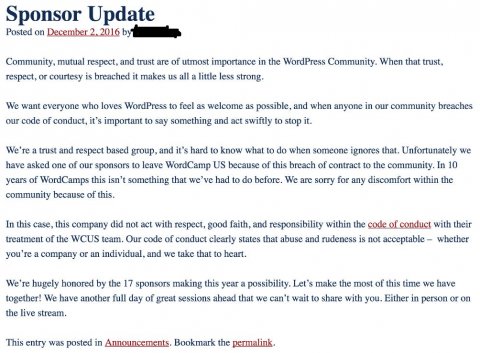 and a quote (in its entirety, due to the fact I’m not sure the text is available as text elsewhere):

Community, mutual respect, and trust are of utmost importance in the WordPress Community. When that trust, respect, or courtesy is breached it makes us all a little less strong.

We want everyone who loves WordPress to feel as welcome as possible, and when anyone in our community breaches our code of conduct, it’s important to say something and act swiftly to stop it.

In this case, this company did not act with respect, good faith, and responsibility within the code of conduct with their treatment of the WCUS team. Our code of conduct clearly states that abuse and rudeness is not acceptable – whether you’re a company or an individual, and we take that to heart.

We’re hugely honored by the 17 sponsors making this year a possibility. Let’s make the most of this time we have together! We have another full day of great sessions ahead that we can’t wait to share with you. Either in person or on the live stream.

This entry was posted in Announcements. Bookmark the permalink.

I’m not sure if the later deletion of post was intended as a retraction. It’s possible it was, but the fact that Ms. Kaos said, on behalf of the WordCamp US organizing team, that Pantheon’s sponsorship was revoked due to “abuse and rudeness” needs to be noted even if it was later retracted. Even if the reason is incorrect, at the point right after Ms. Kaos made this post, the general impression is that Pantheon breached the agreement, and based on facts which have been brought to my attention in the days since, I can state with confidence that is not the case.

The root cause of this appears to be one major oversight by the WordCamp US organizing team, and that was to not contract with the official hotel (the aforementioned Sheraton Downtown Philadelphia) to either prohibit or control venue sponsorship deals for the duration of the event. As stated in a comment on the WP Tavern post:

Whatever agreement WCUS had with the Sheraton obviously didn’t include a say in what advertisements could be displayed at the Sheraton during WCUS. If it did, the organizers would have gone directly to the Sheraton to have them removed. That didn’t happen.

Of course, that’s far from the alpha and omega of what went wrong, but just to be sure there’s no mistake about it, let me say it in as many words: This whole misunderstanding came from an oversight or omission by the WordCamp US organizing team. Now, even after realizing they made this rather unfortunate oversight, there was a lot that could have been handled differently by the organizers.

Let’s start with what the organizers actually did in their interactions with Pantheon staff. I have been told that at least one other major website software conference, the typical method of handling issues like this, when it arises this late in the day, is to have a meeting in the morning after everyone has rested and calmed down. This wasn’t what the WordCamp US organizers did: the situation was handled that night after some heated emails between Matt Stodolnic and the organizing team, with Matt Mullenweg (Automattic CEO and WordPress project founder) eventually getting involved and making the actual call to revoke Pantheon’s sponsorship. Compounding the problem was Matt Mullenweg’s tweet during the wee hours of the morning (since deleted, but thankfully we have an uncensored screenshot of this one):

(in apparent reply to the tweet early that afternoon: “Headed to #WCUS tomorrow? Stop by our booth to say hello 👋 & grab a limited edition Pantheon t-shirt!”)

Imagine for the moment you’re a Pantheon employee that for whatever reason is not in Philadelphia, and you see this come across your Twitter feed. Yeah, not a pretty picture is it?

That tweet, combined with “behind the scenes” conduct during the same time period which is now coming to light, is a flagrant nosedive to levels far short of the Houstonian and Texan values I would expect Mr. Mullenweg to exhibit when representing not only himself and his company, but Houston and Texas as well. A source told me Mr. Mullenweg was drunk when he tweeted this; there’s really no way for sure to know exactly what his state of inebriation was, and to me it really doesn’t matter.

(I might add I was offended enough to read this tweet, and see some of the other evidence around this incident, that for a brief time, I considered changing blogging platforms. I have in the past considered Pelican and Octopress, and may consider others, including any future forks of WordPress itself. Ironic that would be since WordPress itself is a fork of b2.)

Another burning question that remains: if this was about a violation of the WordCamp US rules and conduct between Pantheon staff and the WordCamp US organizers, why was Matt Mullenweg even getting involved? He was not one of the organizers and the buck is supposed to stop with the lead organizers of the event–not executives of Automattic. A parallel could be drawn here with what Renato William Jones did in the 1972 Olympic men’s basketball finals which eventually led to the USSR winning the game against the USA when they shouldn’t have. In that case, it’s pretty well recognized that Mr. Jones really had no business interfering with the officiating of the game. Such would seem to be the case here: It was up to the WordCamp US organizers to make a decision, and the CEO of Automattic had no business running over to the scorer’s table to say “they aren’t sponsors anymore.”

If Ms. Kaos wants to talk about how “[w]e’re a trust and respect based group”, it’s really hard to trust anyone when Mr. Mullenweg is willing to stick his fingers in the event organizers’ pies where they don’t belong, and disrespects the letter of the agreement with a sponsor by cancelling the agreement when it wasn’t actually breached by the sponsor. If Ms. Kaos wants to talk about “abuse and rudeness” then let’s talk about the huge lack of due process afforded to Pantheon and their employees regarding their sponsorship, and how abusive and rude (and unprofessional!) it is to rush a decision out there on a Thursday night before the WordCamp US event. (I’m not surprised if after putting that out there, I just get crickets.)

So, here is what I see as the sum total of all this: