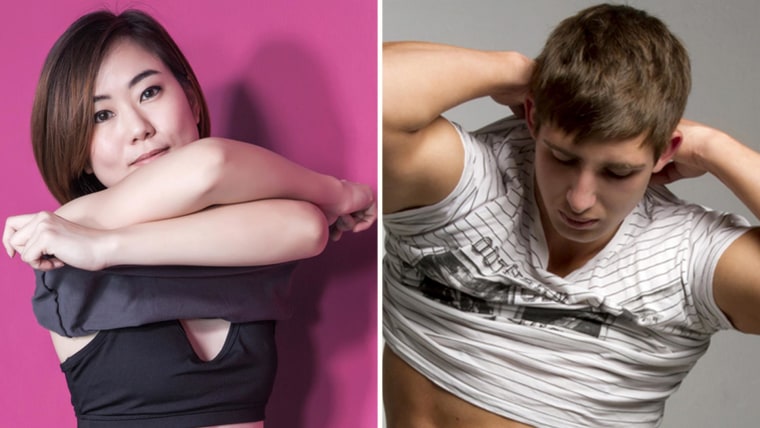 This is something I wouldn’t even have thought about had I not had a poll question pop up in my Mastodon feed.

There are a few different places where this has been written about but for the purposes of this post I will cite this article from NBC’s Today show website and the Seventeen article which it links to.

From the Seventeen article, here is the difference:

Boys tend to take them off […] by putting their hands over their head, grabbing it from the back of their necks, and yanking it off over their heads.

The odd part about this is that growing up, I was only ever taught what is now considered the “girl way”. I never even considered the “boy way” until looking it up after answering the poll.

I’ve posted many times about gender norms and the (sometimes silly) gender-based labels and/or gender-based disparities in labeling that society has slapped on certain things. For the new people here’s a (possibly incomplete) list:

So back to the story at hand. I just now tried the “boy way” of taking off my shirt (I’m sitting in my home office) and to be honest, it feels really awkward and clumsy. I’m reminded, for some strange reason, of one rather strange interaction in what was most likely eighth grade (definitely middle school and definitely the middle school where I spent my entire eighth grade year and most of my seventh grade year). In that interaction I was told I carry my books “like a girl”, which was in front of me with my arm around the cover with the cover facing me and my hand around the spine. I was of course taken aback at this and this guy showed me the “like a boy” way, which was at one’s side with the hand reaching around the spines at the bottom. I tried this, and it too felt awkward and clumsy, just like the “boy way” of taking off my shirt mentioned above. I think I may have even dropped or come close to dropping my books after trying this supposed “boy way” of carrying books. I went back to what had been called the “girl way” and oddly enough nobody mentioned it again that I remember. (In fact, the more I think about it, the more I suspect it may have been a very low-key type of bullying. Oh, how I wish I had realized this back then…)

Thankfully, now, I’m well past the age where I really care about whether or not what I do is labeled as the “girl way” somewhere. Though, part of me is now still left wondering if I was supposed to be taught the grab-over-the-head (“boy”) method instead of the cross-arms-at-the-waist (“girl”) method.

Things have changed a lot since the early 1980s when I grew up. I’m not going to go into details as that would be a whole post unto itself. Education has most certainly changed; this I have learned anecdotally being involved in a business where I frequently deal with children as well as reading through resources geared to parents (as a hopeful future parent myself). One would think something like dressing and undressing would seem to be rather timeless, though, unless the clothes themselves change a lot. At least as far as men’s/boy’s fashion, I haven’t really seen a whole lot of change from the clothing end. It’s still the same shirts and pants we’ve all grown to love or hate, save maybe for kilts (particularly Utilikilts) and the like, which are still a long way from truly catching on.

There is one change that people often forget about: at one time pink was for boys and blue was for girls. Even fewer realize the main reason for the reversal: Mamie Eisenhower’s pink dresses, which gained much more notoriety in 1952 after she became First Lady. Once you’ve fully processed that rather heavy thought, take a look at this history of First Ladies. Pat Nixon (1973), Rosalynn Carter (1981), Nancy Reagan (1985), Barbara Bush (1989), Laura Bush (2001), and Jill Biden (2021) are all shown wearing very bold and very blue outfits at least once. Arguably, there’s been a lot more blue than pink worn by First Ladies since 1952 (it’s difficult to know for some of the earlier years as many of the surviving photographs are only black-and-white). Yet that by itself hasn’t been enough to make blue the “girl’s color” once again, and I’m not sure there’s a way to explain away this mystery.

But the bigger mystery is who originally came up with the over-the-head method to take off a shirt, and who slapped the “boy way” label on it if it’s not the same person/people. It’s a mystery that will likely remain unsolved for the foreseeable future, for better or worse. What I do know is what I was taught as a boy that’s now being mislabeled as I see it.