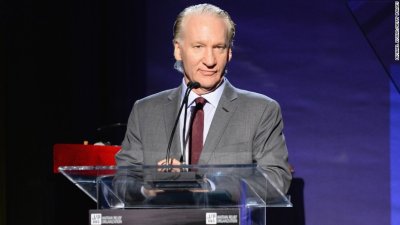 As CW39.com (among many other outlets, I’m sure) reported recently, viewers of Bill Maher’s “Real Time with Bill Maher” show on HBO heard him use an almost universally offensive racial slur in a joking manner in an interview with Republican Senator Ben Sasse of Nebraska, who was on the show to promote his book.

The two were discussing teenagers and maturity when Maher mentioned that adults dress up for Halloween in California. He then asked Sasse if people do that in Nebraska.

“It’s frowned upon. We don’t do that quite as much,” Sasse said.

“I’ve got to get to Nebraska more,” Maher replied.

“You’re welcome. We’d love to have you work in the fields with us,” the senator added.

“No, it’s a joke,” Maher said, breaking the silence.

The story goes on to mention the predictable outrage on Twitter, calling for Mr. Maher’s firing.

Senator Sasse, to his credit, apologized for just cringing and not speaking up in a series of tweets about the incident:

Am walking off a redeye from LAX.
3 reflections on @billmaher
1. I’m a 1st Amendment absolutist. Comedians get latitude to cross hard lines.

2. But free speech comes with a responsibility to speak up when folks use that word. Me just cringing last night wasn’t good enough.
(2of4?) https://t.co/e4Bw8s8tV2

(4of4)
"…The history of the n-word is an attack on universal human dignity. It’s therefore an attack on the American Creed. Don't use it.” https://t.co/kEZm5vPFHK

I totally get just being at a loss for words in the heat of the moment. It happens to the best of us, live TV or not. Nevertheless it does take a bit of courage to come out and say “this is what I should have said instead of just cringing” and I applaud Senator Sasse for his candor and courage in making these tweets.

Bill Maher has maintained full radio silence on Twitter, but CBS News, among other outlets, report Maher issued an apology. In that same story, HBO says they will remove the remark from subsequent airings of the show (presumably by blanking out the audio of at least the most offensive word).

So it looks like Mr. Maher keeps his show, despite making a rather grave mistake. And I’m okay with that, I’m not mad at HBO at all for choosing to keep Mr. Maher on the air for now. I think the apology addresses the issue, and as long as he doesn’t use a similar slur again going forward, I consider the issue resolved. There’s no need for him to lose his show over this, and for people to pressure HBO to take Real Time off the air smacks of overreach. If HBO management feels they need to edit out the offending word from reruns of the episode, that’s fine by me as well; in this particular instance, I would rather they avoid offending a potentially large section of their viewing audience yet again, than re-air the segment as is “just because.” (For the record, I am currently not a paying HBO subscriber; I do not even have my TV hooked up to cable at the moment.)

Oddly enough, I consider this latest gaffe much worse than the comments that essentially resulted in the cancellation or non-renewal of Politically Incorrect, Mr. Maher’s previous show on ABC. For those that don’t remember, it was on his 2001 September 17 show, six days after the terrorist attacks on NYC and the Pentagon, and a good seven years before I even started this blog. Quoting the CBS News article linked previously:

“We have been the cowards, lobbing cruise missiles from 2,000 miles away. That’s cowardly,” Maher said. “Staying in the airplane when it hits the building, say what you want about it, it’s not cowardly.”

While I can see how some people (in particular those in the military) would take offense at that, the worst thing about those remarks was the timing. If Mr. Maher had waited until at least early 2002 to say that, any offense would have been far more limited. I realize it’s much easier to say this in distant hindsight, when the emotions of the nation have long since dissipated. ABC may well have made the right decision for them given the political climate of the time, but it should be noted the person/people in charge at ABC didn’t even cancel the show right after the offending episode, but waited until the contract was up the following May (and it didn’t exactly work in Mr. Maher’s favor that ratings had been declining for a while, which I might add, is something that is much less of an issue with HBO).