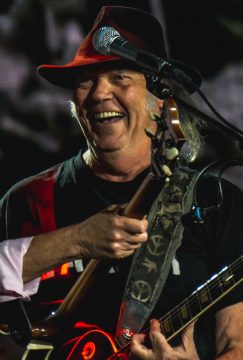 For those of you who have either missed the news or are catching up on this long after the controversy has cooled off, Neil Young pulled his music from Spotify after the latter refused to remove the show of  famous podcaster Joe Rogan. He was not the only artist to do so, but was perhaps the most visible. Quoting Wikipedia:

In January 2022, 270 scientists, physicians, professors, doctors, healthcare workers, veterinarians, a dentist, psychologists, physicians’ assistants, medical students, an engineer and a podcast host wrote an open letter to Spotify expressing concern over “false and societally harmful assertions” on The Joe Rogan Experience and asked Spotify to “establish a clear and public policy to moderate misinformation on its platform”. The 270 signatories objected to Rogan broadcasting COVID-19 misinformation, citing “a highly controversial” episode featuring guest Dr. Robert Malone (#1757). The episode has been criticized for “promoting baseless conspiracy theories”, including “an unfounded theory that societal leaders have ‘hypnotized’ the public.” The signatories further assert that “Dr. Malone is one of two recent JRE guests who has compared pandemic policies to the Holocaust. […]

On 26 January 2022, Neil Young removed his music from Spotify after they refused to remove the podcast.[291] Joni Mitchell subsequently removed her music in support of Young.[292][293] Other artists and podcasters, such as Nils Lofgren and Brené Brown, also announced a boycott of Spotify.[294][295]

There’s a delicate balance between the right to free speech and the responsibility for one’s words. This is particularly true when one is in a position to speak to a wide audience. Mr. Rogan would do well to recognize having a wide audience is a privilege. Spotify, too, has a responsibility to do the right thing. In the past, Google’s one-time mantra of “don’t be evil” has met its share of criticism when apparently ignoring that mantra, or at times, sticking to it in only a watered-down or half-a-loaf manner. In this case, I believe Spotify would do well to adopt this motto itself.

Until now, I’ve never been either for or against Joe Rogan. However, it troubles me that anyone who has the kind of a following that he does would knowingly invite people like Alex  Jones or Dr. Malone. I think it speaks volumes that Mr. Jones has been banned in some form (whether personally, his show, or his companies) from many different platforms: Some the platforms which have banned him are: Twitter, Facebook, Instagram, YouTube, PayPal, the Apple App Store, the Google Play Store, and Roku. You don’t piss off this many different companies without getting something way wrong.

And Mr. Rogan has no problem allowing Mr. Jones as a guest on his show. This is even after the latter has demonstrated a clear track record of supporting what are widely believed to be fringe conspiracy theories, going back at least as far as the 2001-09-11 terrorist attacks. (Yes, that’s now 20 years ago.) Similarly for Dr. Malone. He is unfortunately is using his status as a medical doctor to spread questionable, if not outright false, information about COVID-19 vaccines.

This is the kind of misinformation that literally kills people. The vast majority of the people who have died from COVID-19 have been unvaccinated for whatever reason. In most cases, these were entirely preventable deaths, making them all the more tragic.

I was a very sproadic Spotify user some time ago but have not used the service at all recently. I definitely will not miss Spotify should it disappear completely. In fact, if Spotify is going to take the side of the anti-vaxxers and conspiracy theorists, I would go as far as to say good riddance to bad rubbish.

Two days after the company pulled Neil Young’s music, Spotify’s stock price hit a 52-week low. It’s quite possible Spotify has checkmated itself, but only time will tell.

Apparently, if you work for the Department of Homeland Security, you’re above the law, and can do things with impunity that can easily result in ISP abuse complaints if done by an average citizen. Like this:

A recent Infowars post (warning: link contains profanity) details what some DHS employees do on company time. George Donnelly had his curiosity piqued by one of the few offensive comments posted to Infowars, and decided to see who the IP address belonged to. For those who don’t want to read the unedited copy, it goes something like this paraphrased version (misspellings in original):

Screw you, screw all you lower lifeforms, you wont change anything. ride the bus, TSA is here to stay there doing a great job keeping americia safe.

The answer shocked him as much as it shocked me, and it’ll probably shock you as well: the comment came from an IP address (216.81.80.134) registered to the Department of Homeland Security. In plain English: it was most likely posted by a DHS employee on paid time; at minimum, it was posted from the DHS computer network. It would be one thing if it was just a flame with no profanity, but as posted, it goes way over the line.

George poses some interesting questions for the DHS worth quoting:

We know what the answers should be. I anxiously await whatever response George gets from the DHS. I’d also like to know who at the DHS thinks it is such a good idea to go trolling blogs that express negative opinions about the government, which are protected speech by the First Amendment of the US Constitution. To me, this is dangerously close to intimidation by the DHS, the type of thing which Thomas Jefferson had in mind when he uttered this quote:  “When the people fear their government, there is tyranny; when the government fears the people, there is liberty.”

As a US taxpayer, I believe I’m entitled to know why the DHS is spending my tax dollars like this. While I would find it slightly repulsive if DHS employees did this on their own time, I find it positively abhorrent this is happening from an IP address registered to the DHS and quite possibly done by DHS employees on the clock.

And I am giving everyone advance notice: comments of the sort referenced by George in his post to Infowars linked above are, as a rule, unwelcome on this blog, particularly if they contain profanity. Even if such comments are not published on this blog, I reserve the right to forward such comments directly to news media if I determine such comments are posted from government networks, the corporate networks of known government contractors, or if otherwise connected to the government or corporations which contract for government business. As part of one of my jobs, I talk to news media on a regular basis, and I will not be shut up easily.

Let there be no mistake about it. I love my country, and I love the First Amendment, which gives us the freedom to criticize our government when it makes mistakes. In closing,  I’d like to refer to another, possibly lesser known, quote of Thomas Jefferson’s: “In matters of style, swim with the current; in matters of principle, stand like a rock.”

I consider this a matter of principle. I stand like a rock.