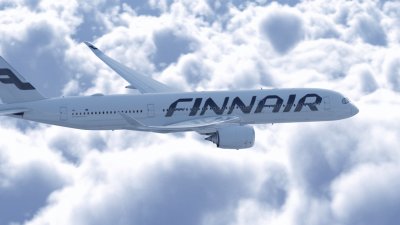 Okay, so this is already a bit old (I intended to wrap this up around January 25th, and really, really let it slip), but it still deserves a short piece on it. Incidentally, I think the research I did on this one is worth the wait.

Ordinarily an airline flight is nowhere near being a newsworthy event. Planes take off and land successfully on an average of more than one per second around the world–over 100,000 flights according to this blog post by Gunner Garfors. The only times a flight is newsworthy are when one or two people wind up being the only passengers on the plane, or when a flight is affected by an incident (which need not be an outright “crash” to qualify as newsworthy).

This flight, however, made the news for an entirely different reason. It was Flight 666, which Christians regard as “the number of the beast”, destined for the airport in Helsinki, Finland, airport code HEL. And it took place this past January 13, which was Friday the 13th. Despite just about every superstition saying something would go wrong, nothing did.

Of course, that raises a lot of questions about just how seriously one should take superstitions. There aren’t that many superstitions that I have ever taken that seriously, and certainly the least of them would be 666 being the “number of the beast”. Friday the 13th has only been a truly bad day for me once out of the 72 times it has come up on the calendar since I was born (and most would say it was my own damn fault, but I won’t get into that here). When I travel, I don’t fly (the last time I got on a plane was about 10 years ago and the security procedures have gotten ridiculous), and I think Greyhound schedule numbers all have four digits (though whether they intentionally avoid any ending in or containing 666 is up for debate). Even then, I wouldn’t have any issues boarding a flight 666 even on Friday the 13th. (One of the few airline flights I took, if I remember correctly, was on a Friday the 13th, and I lived to tell about it.)

If only it were that simple. We don’t even know for sure if 666 is the real “number of the beast.” According to this Wikipedia article some early manuscripts have 616 for the “number of the beast” instead of 666. Would this make June 16 the unluckiest (or most devilish) day of the year? Should it have been flight 616 to HEL that we should have been keeping an eye on?

I did search for any record of any airline’s flight 666 or flight 616 crashing or having any type of incident, whether on Friday the 13th or not. So far I have not come up with anything. A Wikipedia article I consulted shows four flights ending in 13 having incidents; I did not check to see if this is within statistical norms but I suspect it is. Given the number of airline incidents over the years, it would be difficult to find all incidents that have ever occurred on a Friday the 13th, regardless of flight number. If there’s enough interest, I’m willing to dig deeper. If someone has already researched this, I’d love to know about it and do a followup post on the topic.

Apologies in advance to the easily offended… but this story was just begging for a few really bad jokes to be made.

The London newspaper Metro reports on a Japanese airline’s very strange new policy, which may already have some passengers a bit pissed off.

All Nippon Airways is desparate to reduce their carbon emissions, and is thus requiring passengers to urinate prior to boarding. This policy was put in place for a trial period of four weeks beginning on October 1.

Personally, I think ANA’s management is just peeing into the wind here. This is probably going to lose them quite a few customers, and probably for longer than a month. Customers tend to remember bad experiences longer than good ones. Put another way, ill will lingers longer than goodwill. Case in point: anyone remember ValuJet? (They are still around, but shed the old name with near-zero or possibly even negative goodwill when buying up a smaller carrier named AirTran.)